Also on this date

Each year, Urban Green's annual conference tackles an issue or trend relevant to urban professionals in the green building sector. 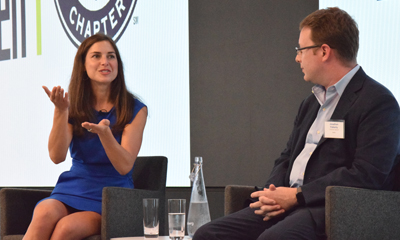 2017 | It's Electrifying: Next Steps for Buildings + Systems

The basic underlying math tells us that to achieve 80x50, we must do three things:
1. Cut building energy use in half,
2. Green the grid (make the grid carbon neutral), and
3. Electrify systems to reduce fossil fuel use in buildings.

However, the path to achieving all three legs by 2050 is cluttered with uncertainty, raising more questions than answers. When is the right time to electrify building systems? Which technologies will we be seeing more of? Who will do the work?

Urban Green’s 2017 Conference, It’s Electrifying! Next Steps for Buildings + Systems, will feature a robust dialogue on emerging energy and building technologies and will examine the central assumptions about how we'll build and operate our buildings over the coming decades.

We will be announcing more information on our 2017 event shortly, so check back soon!

How can we design, build, retrofit, and run commercial offices for a low-carbon future? Dubbed HQ2050, our 2016 conference brought together a group of leading buildings professionals to explore new strategies, barriers, and opportunities for the office of the future.

Read the 2016 conference recap on our blog.

As NYC strives to reduce its carbon emissions 80% by 2050, the problem of what to do with inefficient—and in some cases deteriorating—midcentury buildings looms large. Urban Green Council’s 2015 annual member conference, Modern All Over Again, explored the building practices of the modern era as well as the current business, design, and conservation benefits of retrofitting and renewing our mid-century icons.

Read the 2015 conference recap on our blog.

Hours after a coalition of over 300,000 climate marchers and the City of New York both called for a dramatic reduction in carbon pollution, Urban Green’s Façade Face-Off dove into the details of the role buildings will play in doing just that. Why focus on façades? Panelist Kevin Kampschroer (US General Services Administration) said it best: “All good projects must start from the outside in.”

Read the 2014 conference recap on our blog.

Local Law 97: All the Basics

Episode 10: What's Next for Sustainable Buildings in NYC?

Thank you to the members of our
Monthly Programs Committee,
who help organize our public programs.